No other current historic building renovation project in the United States matches the restoration of the Library's century-old Thomas Jefferson Building, according to the lead architect on the project. 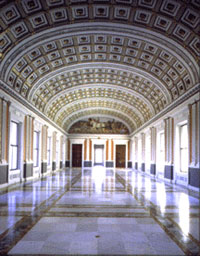 The Northwest Gallery has been restored to its gleaming glory. The painting in the lunette at the north end, "War," is by Gari Melchers. "Peace" is at the south end. - Michael Dersin

"This is the greatest project of this kind in this country. I don't think there is anything else like it," said Bruce Arthur, head of the architectural division of the Architect of the Capitol (AOC). He and two other architects, Kevin Hildebrand and Andre Copeland, oversaw the renovation of both the Jefferson Building and its younger brother, the 58-year-old Adams Building, from 1984 to the present.

Discussion of the renovation of the two buildings began with congressional hearings in 1979, and the plans, construction, interior design and furnishings have so far cost in excess of $100 million.

The job of the architects was to work as a team with consulting architect Arthur Cotton Moore (who was retained in 1982 to plan the renovation and restoration) and to implement his vision. The overall goal was to take those spaces deemed to be of historic importance and to restore them to the way they looked originally, while making them functional in the information age and making work space more livable for Library staff.

"We concentrated our attention on historically significant space, such as the Jefferson Building's Main Reading Room, the Great Hall and the first- and second-floor curtains [galleries] on the west side facing the Capitol," Mr. Arthur said. "Restoration of the considerable amount of fine art work was accomplished by Perry Houston Associates and coordinated by the AOC Office of the Curator under the supervision of Barbara Wolanin. 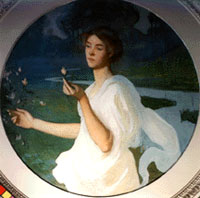 "Spring," one of F.W. Benson's paintings of "The Seasons" in the South Corridor. - courtesy Architect of the Capitol

"We restored second-story space on the west side to its original use, which was for exhibitions," Mr. Arthur continued. "Other spaces, such as the north and south curtains that now are colonnaded areas and the ground floor, did not have to be restored with historical accuracy but had to be made functional."

Arthur Cotton Moore's signature style of the 1980s, which he called "Industrial Baroque," is most apparent in the massive mahogany colonnades that occupy the north and south curtains on the first and second floors and southeast and northeast curtains on the first floor. "I think the colonnades perform their intended function, which was to provide two levels of office space in structures that leave the original walls and ceilings intact," Mr. Arthur said. "I think the style was successful in terms of what Arthur [Cotton Moore] was trying to do."

Other architects agreed; Moore won an American Institute of Architecture design award for these colonnades in the early 1980s.

Although the colonnades are intended to be removable structures in historic space that must be kept structurally intact, they are so massive that they dominate the rooms in which they were built. "In reality, they are so large that the feeling of reversibility is somewhat lost," Mr. Arthur said. "Most people react strongly to them."

Mr. Arthur likes them. "Overall," he said, "I think the design is striking. The execution of the design in the details is very powerful." 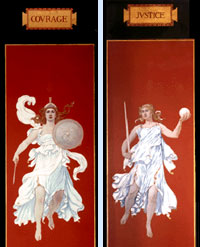 George Maynard's "Courage" and "Justice," representing two of eight "Virtues" in the Great Hall. The other panels depict "Fortitude," "Patriotism," "Industry," "Temperance," "Prudence" and "Concord". - courtesy Architect of the Capitol

Visitors stepping into each of the three new area studies reading rooms will see three major elements: 1) an open, airy forecourt, where natural light from tall windows illuminates researchers working at new mahogany tables wired for brass lamps and modern laptops; 2) a massive colonnade in the back half of the long room, where division staff work in mahogany-paneled offices on two levels; and 3) the handiwork of the Library's interior design staff, who selected the elegant mahogany furnishings that stand out against the soft colors of the carpet, walls and ceiling.

To effect Dr. Billington's vision of Old World reading rooms with towering shelves of books, each forecourt features stair-stepped mahogany book shelves that rise toward the ceiling between the windows, which have been hung with shades of adjustable white wooden slats to soften the light. In study alcoves in front of each window is a sturdy mahogany study table that seats three researchers on each side. LC designers selected classically styled dark wood armchairs with upholstered backs and seats covered in fabric of colors and designs that complement the overall decor.

The colors of the forecourt carpets, walls, ceilings and upholstery echo or complement the stronger hues of any connecting pavilions. For example, the Asian Division office in the southeast corner of the first floor is painted a warm, vibrant red with blue-gray tones; conference room chair upholstery picks up the teal blue used as a ceiling accent color and the rosy red of the walls. A dusky rose carpet with a darker pattern carries these tones into the reading room, where the walls are pale rose and the vaulted ceilings are pale rose accented with large rectangles of pale blue-gray. All frame the dark wood of the bookcases, tables, chairs and colonnades.

Not only did the architects, artists and tradesmen have to restore the marble, wood, bronze, paint and paintings to their original glory, but, beneath the decorative veneer, they had to create a modern library that was wired for information-age communications systems, plumbed for sprinkler systems to protect the collections and people and equipped with modern heating, ventilating and air-conditioning systems to create an environment in which to preserve valuable materials while on exhibit and in use.

Mosaics were painstakingly restored in the floor (left) and cleaned in "Minerva," by Elihu Vedder (right), which measures 1512 feet high by 9 feet wide. - Carol Highsmith

Mr. Arthur said he thought the most challenging spaces to deal with were the Jefferson's most historical, decorative spaces -- the Main Reading Room, the Great Hall, the ornate pavilions on the northwest corner of the building, and the old House and Senate reading rooms, now known as the Members' Room and the Congressional Reading Room, in the southwest curtain and pavilion of the first floor.

"There was a lot of work to do. We had to install a new electrical system, replace the old card catalog with a new reference center, build new desks to match the old ones, repair and paint the walls, do all of the decorative painting, and build the glassed-in Visitors' Gallery," Mr. Arthur said. 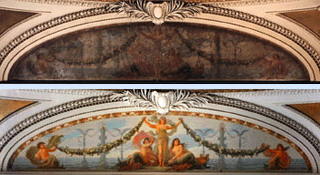 Left, this painting by Robert L. Dodge, called "Fire" (one of four "Elements." The others are "Earth," "Air" and "Water"), is in the Southeast Pavilion. It was so grimy it was barely visible (top). The mural in its fully restored state (bottom); right, restoration work begins. - courtesy Architect of the Capitol, Reid Baker

All of the marble in the Great Hall had to be cleaned, the three-story coffered ceiling over center court had to be redone for the first time in its history (the side bay ceilings were restored during the 1960s), and all of the fine art had to be cleaned and restored. Most of this work was done from scaffoldings. From floors to ceilings, craftsmen cleaned all of the Great Hall's marble by applying a paste-like poultice of compounds that leached out stains and dirt. What emerged after applying the poultice to all marble surfaces, wrapping it, timing it, and then removing the compound and cleaning the marble, were surfaces as snowy bright as alpine outcroppings.

To paint the most ornate, historically significant spaces -- generally, those that face the Capitol on the west -- researchers used electron microscopy to examine 100-year-old paint pigment to determine the original colors, long masked by subsequent patching and painting. One such area repainted with the precise colors of the originals is the ornate corridor and adjacent "special meeting rooms" located in the first-floor northwest curtain, where Library officials once worked in offices known as "mahogany row."

The Members' Room in the first-floor southwest curtain presented a special challenge. "The fabric that covered the walls high above the oak paneling was long missing, and it took some detective work to find the original color," Mr. Arthur said. Scalamandre fabric company researchers found the color and produced the similar soft green brocade that now covers the walls.

Another challenge, not only in this room but throughout the Jefferson, was to plan concealed pathways to carry data and voice communication cables, as well as electrical power wires, to outlets for computers, telephones, copy and fax machines and lamps. In the Main Reading Room and the adjacent Computer Catalog Center, more than 100 miles of fiber optic cables, which connect to LC's mainframes and the Internet, lead to laptop computer plug-ins at readers' desks and outlets for big personal computers.

"One of the main points [of the renovation] was to bring the Library buildings into the computer age," Mr. Arthur said. "We had to develop ways to get wires to computers via paths that didn't exist before, and we wanted it to look like they weren't there."

Architects solved this problem by creating four different styles of metal extrusions, which look like the original cast iron or wood baseboards and moldings, and painting them to match the original color. Wires run through these to power outlets. Readers' tables and desks also conceal wires.

The architects also had to design a false vaulted ceiling in the Sales Shop, in order to provide for lights over the sales counter, and its companion space on the south side of the entrance hall. They suspended ceilings above the colonnades, in order to provide overhead lights for the second-level offices.

Architects also had to overcome the logistical nightmare of having to work in buildings still occupied by Library staff. "One of the most challenging things overall was that the buildings had to be half occupied during construction," Mr. Arthur said. "We had to slice the buildings in half and create two projects out of one, so that the staff could work in one half while we restored the other half. This created problems of dust, noise and security."

Then, there were the hidden problems, such as asbestos and lead paint, which the architects had anticipated but could not comprehend fully until construction began. Asbestos, which was used as an insulating material during the 19th century, and lead, a common ingredient in old paint, are hazardous materials and required special handling. 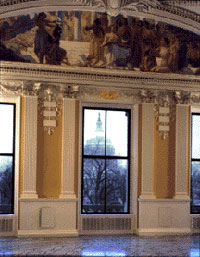 "We could not know the extent of asbestos in the buildings until we started investigating hidden conditions," Mr. Arthur said, adding that as the project progressed, the AOC, in cooperation with Library health and safety officers and worried LC union representatives, developed procedures for removing asbestos safely and testing spaces for safe reoccupancy.

"In historical preservation, dealing with a building of this enormity, you are constantly going to find conditions you did not expect, that vary. You have to be able to adapt, to think in the field, to overcome roadblocks and hassles," Mr. Arthur said.

After walking through the renovated space on Friday, April 11, in preparation for the Librarian's April 14 taping for "CBS Sunday Morning" with host Charles Osgood, and seeing how the space looked upon completion, Mr. Arthur commented: "This historic preservation project was enormously satisfying to the entire team.

"There is no way to describe the immense satisfaction we all feel of looking at the finished product and knowing, 'This is what those people thought; this is what they envisioned. This is why they did it.'"

Gail Fineberg is editor of The Gazette, the Library's staff newspaper.